On 5th December, 2019, Estravel and the Estonian Maternity Hospital Support Foundation handed over a mobile resuscitation table to Hiiumaa Hospital. 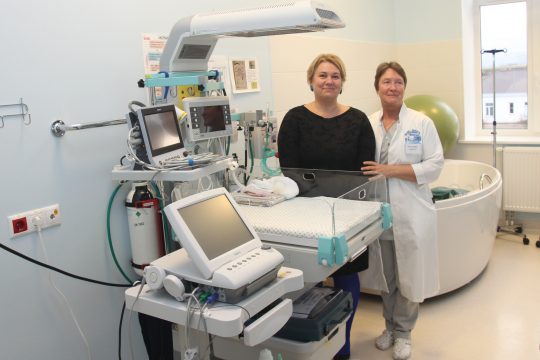 “Estravel is the largest and oldest travel agency in the Baltics. It recognizes social responsibility for Estonia’s sustainability. The company strives to contribute to the development of society. We at Estravel support businesses and organizations important to our country,” said Airi Ilisson, Estravel’s Marketing Director. “In 2019, Estravel participated for the first time in a year-long charity project. We raised money to buy a resuscitation table for newborns in Hiiumaa.”

Why Hiiumaa? According to Ilisson, it was clear that we need to help the outermost regions of Estonia, where due to the shrinking in the population, infrastructure investments at the national level may not be a priority. The number of births in Estonia is the lowest in peripheral areas such as Hiiumaa, Ida-Virumaa, Jõgevamaa and Võrumaa counties, which is why this year’s charity mission fell in favor of the overseas county, Hiiumaa. “It is also important that we have an office in Kärdla,” she added.

Many of Estravel’s customers contributed to the project. For every accommodation booked through hotelliagentuur.ee/en, Estravel donated 5 € to Hiiumaa Hospital. You can also donate your Estravel Gold Card Bonus Points to Hiiumaa hospital HERE until the end of this year.

Riina Tamm noted that this is a very grateful donation project: “We have been thinking about the mobile neonatal resuscitation table for years and have been so pleased that Estravel and the Estonian Maternity Hospital Support Foundation have decided to shoulder it. Hiiumaa has an average of 50 to 60 children a year, which is not much compared to large hospitals, but it is more important for every child. The resuscitation table ensures that we can be as ready as possible during normal delivery and cesarean section because the table can be moved comfortably from place to place.” Tamm added that the Hiiumaa hospital has very good facilities for giving birth; due to security and personal approach, people from Rapla come to Hiiumaa to give birth here.

Gallery: the resuscitation table is handed over to Hiiumaa Hospital